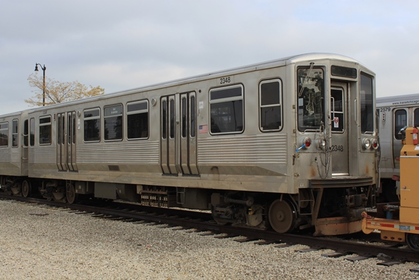 + The propulsion package, while capable of higher speeds, is limited by the logic of the car controls and the external signal system.

In March 1967, the City of Chicago started construction on two rapid transit extensions. One was in the median of the Dan Ryan Expressway from 18th Street to 95th Street and the other from Logan Square via the Kennedy Expressway median to Jefferson Park. The construction projects included 150 cars of the 2200-series designed and built by the Budd Company and funded by the Department of Housing and Urban Development and the City of Chicago.

The City of Chicago was technically the grantee and, therefore, purchased the cars. The City hired consultants, including CTA , who provided engineering assistance to prepare the car specifications and Skidmore, Owings and Merrill, who prepared the aesthetic details of the cars to harmonize with their modernist stations on the Dan Ryan and Kennedy extensions.

The aesthetic features of the 2200-series cars included large windows, charcoal gray seat coverings, beige window masks and gray wainscot panels, loop handles on the seats, and horizontal fluted stainless steel exterior sides. The air conditioning package was entirely under the car and used a system of ducts to distribute air more uniformly throughout the car. A motorman's cab that opened up for passenger use when not in service and a plain front end with only inserts of fiberglass for the windows and lights were additional innovations. Most striking on the exterior was the use of unpainted stainless steel instead of the painted aluminum that had been standard in Chicago designs for twenty years; this would not be repeated until the 3200-series cars nearly 25 years later. These were the last and are the only cars remaining with "blinker" doors, which turn inward as they open.

When compared with the 2000-series cars, the engineering differences in the car and electrical systems were insignificant. The trucks, however, were of a new type, the Budd Pioneer III. These cars have proven to be reliable performers, aggregating more average annual mileage than the 2000-series cars did in their first years.

The auction has resumed. Please click OK to continue bidding. Sorry for the inconvenience.

The auction has been paused due to technical difficulties and will resume shortly. Please stand by...